Crate Rest For An Injured Dog

Crate rest is super important for dogs recovering from injury or illness. Keeping them happy while in the crate is another thing altogether

Houdini recently hurt his knee and has been on very strict crate rest for the past few months.

What this means is he isn’t allowed to go on walks, play in the apartment or do anything much more than stay in his crate. I even have to pick him up and take him outside to go to toilet.

Needless to say, it has been exhausting.

I specifically engineered my life so that my dogs were able to survive without me for short periods of time. I sacrificed a pent house apartment to live in a ground floor flat so that the dogs have a garden. There is constantly a draft so that the dogs can go out of the cat flap any time they need to eliminate (annoyingly Jester is scared of the swing door of the cat flap so I had to take the door off in order for him to go outside). Every move I have made, is so that both my dogs (and myself) have some sense of freedom from each other. This all changed when Houdini hurt himself and I became tied to the apartment again having to make sure he gets a toilet break every couple of hours and moves a little bit in order to prevent sores.

In order to stop both him (and myself) from going crazy while he recovers, I have been keeping his little mind active. 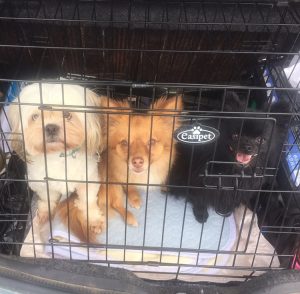 the best as they allow more flexibility as to positioning within the flat. There is usually a front door and a side door allowing you to push it against doors and in corners (vital space saving for city apartments!)

Keep Your Dog Busy in the Crate 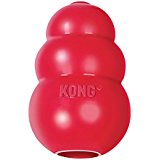 Houdini is getting his food and treats exclusively from boredom buster toys. I put his dog food in a KONG Dog Toy

and freeze it so he stays busy for a longer period of time. We also make him the easiest dog toy in the world to keep him busy.

Teach Tricks in the crate 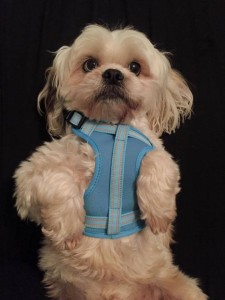 Even if your dog is stuck in a crate, there is no reason training should lapse. Teach a hand target, or to speak or even paw. Keep that little doggy mind going and your dog won’t be bored.

Do you have any other tips to keep Houdini Mc Doo happy in his crate?